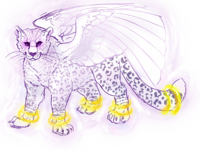 Kygius in its true form

Kygius is a minor god of gemstones and a divine protector of the mentally ill. It currently watches over Zeii, a hero it chose for his strength of heart despite his mental illness.

It is very patient with its hero, even when he does ridiculous things like most heroes do. That being said, it is also very strict in terms of worship. It needs a god amount of godpower to help its chosen hero, and to get that, very specific worship is required which involves colored candles and specific gemstones.

Kygius began as the spirit of a dead human. It then took it upon itself to watch over the mentally ill. Unfortunately at this point, Kygius held no power and could only watch helplessly as neuroatypical humans struggled with living their own lives. Kygius spent a long time in this state, approximating to about 10,000 years in real time.

Eventually, a much more powerful god felt pity on Kygius and allowed the spirit to inhabit any gemstone it liked. This is why gemstones have healing powers, but only to those Kygius deems worthy of harnessing them. Over time, Kygius' power over gemstones grew more and more powerful. It was then that it had the idea to use its power over gemstones to help those who are mentally ill. It would find stones owned by mentally ill humans who needed help and imbue them with power to lessen their burden.

After hundreds of years of this, the same god who allowed Kygius power over gemstones gave it enough power to become a true god. With this new found power, Kygius was able to become the true divine protector of the mentally ill, as well as continuing to be a minor god of gemstones. But, with becoming a god came with watching over a hero, and Kygius was very particular about his choice. In fact, it took years before Kygius decided on Zeii, a human-rottweiler hybrid who worked as a baker in Godville. This is where the two (but mostly Zeii) began their adventure.