Difference between revisions of "Haemoglobin"

About Haemoglobin – anything no one cares about

How she met her stupid hero

Sunday, December 6, 2015. It was a dark, cloudy afternoon, Haemoglobin was bored and decided to go shopping. She spent almost an hour walking around the market, but couldn’t find anything interesting… Just when she was about to give up and go away, she saw a mysterious book lying at the bottom of a beer keg, in the darkest corner of a bakery which was at the middle of a wet market.

It didn’t have an eye-catching cover, not to mention an ugly monogram of “GV” written on it, but Haemoglobin quickly noticed something really, really strange: it was rated 4.8/5 – an impressive rating for a normal-looking book. Since her storage was empty, (and the book was free), she picked up the book, and went back home. 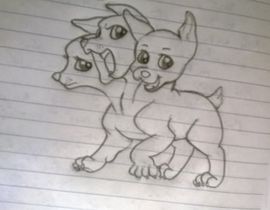 Biliverdinn’s first pet – Bolt (“A Legendary Pet of a Legendary Hero”, drawn by Biliverdinn on a sunny night)

When Haemoglobin got home, it started raining. She quickly ran to her desk, turned the light on, and opened the book.

Just when Haemoglobin started feeling lucky that she didn’t pay anything to get it, strange words started appearing on the first page of the book, right in front of her eyes: "What happened? Where am I? Is this a temple? How did I get here?"

And, tadaaa! She got a new worshipper! "

Haemoglobin's non-temple days, when she was still young and free

It took Haemoglobin a few days to realized that she needed a temple built of one thousand gold bricks. She tried sending Biliverdinn to the arena whenever she had time, but then she quickly realized it wasn't the place for her and her hero. When Bilivedinn got his 13th win, Haemoglobin thought it was a lucky number and vowed that she would never send him to the arena again.

The Goddess and her hero then tried digging Underground Bosses. They only do it when Haemoglobin had at least 3 charges and when Biliverdinn was at full health. They got about 6 gold bricks a day. It wasn't easy - sometimes the hero didn't want to dig, sometimes they encountered strong boss monsters, or worse, sometimes they were matched with mean players...

Things changed when ZPG Arena was opened. It was a place where gods couldn't affect the fight - a place where the heroes had to fight on their own. Since then, Haemoglobin and her hero got about 10-14 gold bricks a day.