The CDF was founded as a response to an evil AI's attack on Cragsmire. The initial raid essentially crippled the League of Shadows and the Regent disappeared. Now the CDF is fighting back against the Uprising's Droid army, driving them from Cragsmire. 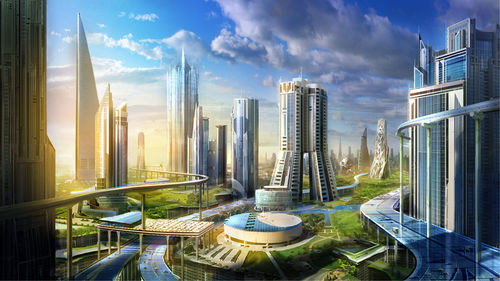 Every once in a while, the Uprising will attack without warning. The CDF responds to fight them off.

Currently, there is no history. The CDF was only recently founded.

The city that all CDF agents and troopers are sworn to protect.

Below is a section from Cragsmire, A History

Settlers moving west from Urbis Caelestis(Godville) arrive at a fertile plain between the Qu'Tox ocean and the river Stohr. The rich soil and mild climate was ideal for farming, so a small village formed. The village's original name is unknown. As the village grew, it was renamed to Freeport. The people of Freeport elect a man named Lorlamir to lead them.

At 56 years old, Lorlamir relinquishes his rule to a somewhat younger man named Anon. Anon takes the office and uses his new power to become the Patriarch or Regent of Freeport. Anon requests that a secondary wall be built to encompass New Freeport. It is projected to be complete in nearly 12 years.

The foundation of the Outer wall is finished. It serves as a small defense until the wall is fully constructed. Trade Federation representatives arrive in Freeport.

Freeport becomes a part of the Trade Federation. Anon announces an heir, despite not being married. His heir is named Elon and looks strikingly similar to Anon. The Outer Wall is nearly complete, though many workers died during construction.

Due to delays, the wall still isn't finished although it is very close. The Trade Federation collapses due to civil war among its member cities. Freeport doesn't get involved. Anon joins with other neutral cities to create the League of Merchants.

Seven more towns and cities become part of the League of Merchants. Anon has health issues that confine him to his bed for several months.

Although recovered, Anon procures a limp and must wear lenses to see clearly. The wall is completed and a memorial to Lorlamir, who recently died, is built upon it.

Anon is bedridden with fever. The League of Merchants elect a man named Nero to replace Anon as chairman. Elon is denied a seat at the council, which angers the people of Freeport.

Anon dies after a very long struggle. Elon ascends to the throne at 28 and becomes Regent. Nero denies Elon's right to lead the League of Merchants.

Elon has a fortress in the Jagged Peaks built. He keeps it a secret from everyone besides his advisors. The fortress is simply named, The Bastion.

Nero turns the council against Elon, claiming that the Regent has more power than any one man should. The people continue to support Elon, but Nero is diligent in his protesting.