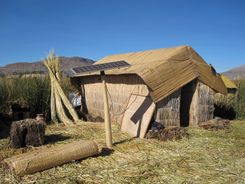 The small hut at a classified location where the Hero BlueStapler was born. Notice the solar-powered darkness absorber on the left side of the hut.

BlueStapler (born August 30, 2011 / Day 478 g.e.) is the champion of the God BlueStapler and the 522nd member of the Knights who say Ni. He is a former Hierarch of the Blue Feather Guild and a a former Cardinal of the Masters of Earth and Heaven guild. He is also the seventeen generation of the Phthalocyanine Spectrum.

BlueStapler is formally styled as Blue of House Stapler, the First of His Name, Keeper of the Wiki, Publisher of The Garlic, Guardian of Eagles, Defender of the Faith, Warden of the Twenty-Fifth Forty-Seventh Temple, Honored Enhancement Room Frequenter, Famous Hero of Godville, Captain of the Eightieth Ark, and Protector of the Realm.

While initial reports have indicated that he was named after his god, further evidence suggests that he was simply named after a document attachment device and the color green not being available.

The Hero BlueStapler's current pets are a Solar Bear named Dogmeat and a Gummy Wyrm named Iago. Past pets include: 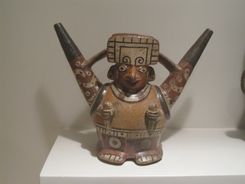 A sculptor’s artistic rendition of the Hero BlueStapler’s jet pack.

In October 2011, the Hero BlueStapler attempted to build a jet pack to compensate for his complete lack of transportation skills. He boasted that, when completed, the jet pack could transport him faster than a level 50 Solar Bear. Moreover, that the jet pack would use environmentally friendly materials, run entirely off water, and be Godville's first zero emission mechanical flying machine. Skeptics questioned whether such a device could be built, but environmental groups hailed the effort saying that "no longer will our land be plagued by the harmful methane gasses of pets."

Over 7,000 people gather for the first public demonstration of the jet pack. After much fanfare and speeches, BlueStapler put the pack on, pressed the ignition button and . . . the crowd gasped in horror.

Media outlets and the magazine Scientific Godville dubbed the jet pack a complete and utter failure. Never before has such a device promised so much and delivered the complete opposite. "BlueStapler is ruined" news stations stated.

Three days later, documents in the Godville Patent and Trademark Office revealed that the purpose of the jet pack was "a device designed to smack the user's face into the ground at the most inopportune time." Following that release, the jet pack was later designated an absolute success. 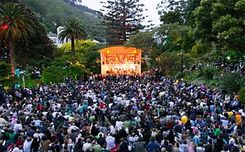 The early hours of the half party.

On April 28, 2012, the Hero BlueStapler hosted a half party commemorating the 50% completion of his temple. The party was held on his temple grounds in violation of established Godville law. Although the hero BlueStapler's chronicles document that "one in two Godville citizens appeared" (an amount equal to 500,000), experts estimated attendance at between 25,000 and 35,000. Godville police were called to the disturbance four times throughout the night and fifteen people were taken to the Godville Memorial Hospital. The next morning, insurance adjusters documented that the left side of the temple had completely melted from the constant stream of lightning bolts. The invoice from the Blue Feather Beer Company indicated that no less than 11,458 gallons of beer had been consumed. A play based upon the party sold out a record seventy-four straight showings at the Grawman Theater in Godvillewood.

On June 1, 2012, the Hero BlueStapler changed his motto to As Inappropriate. At some point in the following seven days, it was changed to Removed Per Godville TOS. To date, no one, including the Godville Administrator, has come forward as the entity responsible for making the change. On June 18, 2012, the Godville Administrator was quote with saying "Although our policy is that it is every citizen's duty to report a motto as inappropriate, no one in this administration received any reports regarding BlueStapler's motto, nor do our records indicate that we changed BlueStapler's motto at any time." On August 15, 2012, the Godville Police Department officially closed the case. An underground network of heroes has reportedly threatened to stage a flashmob to "free BlueStapler's motto," but, to date, no flashmobs have been reported. 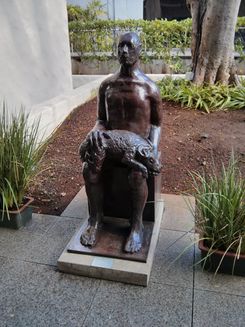 On August 25, 2012, the Hero BlueStapler successfully managed to convince the priests to heal his level 15 solar bear named Dogmeat. To commemorate this momentous occasion, he commissioned a sculptor 9,532 coins to make a statue of the priest performing the resurrection ritual. The sculpting instructions called for a depiction of a priest sitting down resurrecting the solar bear Dogmeat.

Upon the Hero BlueStapler’s return to the sculptor’s shop, he discovered a sculpture of a priest healing a solar boar. BlueStapler was livid, “what the heck is a solar boar?” he asked.

“I don’t know,” replied the sculptor “does this look like Godville University’s Zoology Department?.”

“What am I supposed to do this statue? BlueStapler asked.

“Tie it to your solar bear and drag it back to your temple.” The sculptor responded. 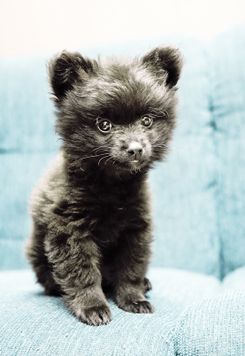 On June 28, 2012, BlueStapler tamed Dogmeat. He was just about darn near the cutest thing ever. What happened? 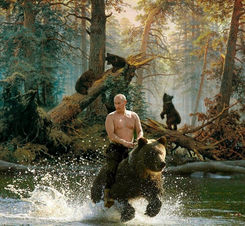 BlueStapler riding Dogmeat back to town.

On January 30, 2013, BlueStapler became the first god to have been personally named in the questionable content section of the ideabox. Paparazzi from as far away as Russian Godville surrounded BlueStapler’s temple and began asking questions. Reporters from the five major new stations, the Godville Times, and The Garlic appeared. The event was headline news for an entire week. For months, BlueStapler accepted various offers from the major movie studios for the film rights.

On February 11, 2013, BlueStapler left the cryptic message "Peach Out, Home Brains" in the BlueFeather Guild Council, changed his motto to the same message, and joined the Knights who say Ni guild.

Cryptologist, scholars, and persons of great intelligence from across the land gathered to determine the meaning of the indecipherable phrase. "How does one peach out a home brain?" and "What does peach out mean and more importantly, what is a home brain" scholars asked. Upon thirty days of vigorous debate, the consensus of the group what that BlueStapler had heard the common phrase "Peace Out, Hombres" (roughly translated as "Goodbye Guys") and, in attempt to be hip, incorrectly repeated it.

On September 18, 2012, BlueStapler finalized the plans for his temple according to the following strict requirements transmitted by his god:

Temple Plans in Response to Requirements

The next week the Hero returned with temple plans using exactly 1,000 gold bricks: 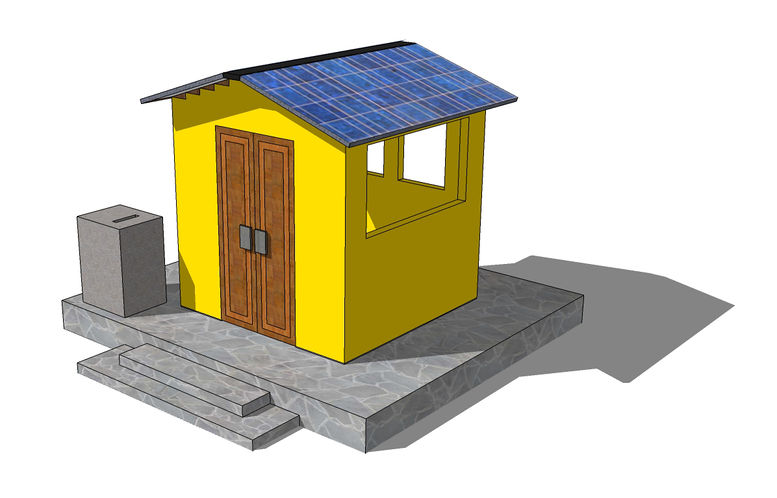 The above information is based upon the following:

For purposes of brevity, and because Godville no longer has skirmishes, I removed this section. However, the information is still accessible through a previous version of this page here.

What is a Miraca Ho? Thanks for asking. A miraca ho is someone who uses one or more miracles during an arena fight or a skirmish. Using a miracle during a fight is rude, socially unacceptable, and bad form. It also really pisses people off. Xzzwxz calls them b-holes, but that's rather uncreative. I call them miraca ho's, which is short for miracle horrible.

Kllr Wolf 庙  used TWO miracles during a skirmish and still lost. He is a miraca ho. 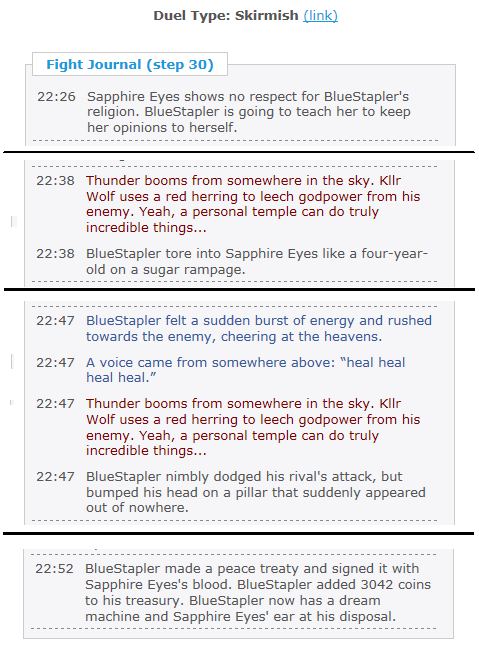 SselluosS 庙  used a miracle during an arena fight and still lost. He is a miraca ho. 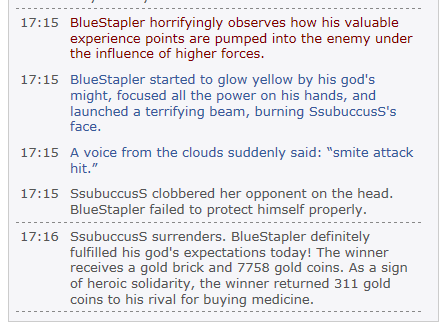 Catsocks 庙  used TWO miracles during a skirmish and still lost. She is a miraca ho. 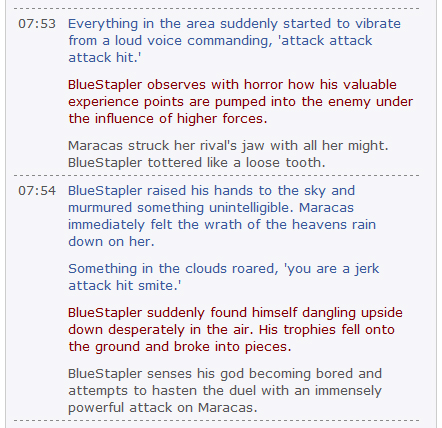 On November 26, 2013. BlueStapler bought the most expensive Medicine dropper of holy water of all time.