Difference between revisions of "Beehive on a stick" 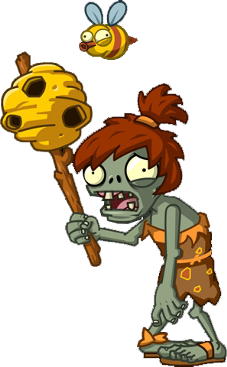 This weapon is popular with the undead, who feel no pain.

The Discworld-famous CMOT Dibbler of Anhk-Morpork is renowned for his delectableinteresting street cuisine, and virtually all of it is "onna stick." His specialties tend to be in the area of sausages, but occasionally he dabbles in other areas. In this instance, he thought he'd try his hand at something sweet and treacly. While most chefs would have been content with a bit of honey, or even a nice slab of honeycomb, Dibbler went all-out with the entire beehive. Unfortunately, while this was a failure in the culinary sense, it makes for a deadly weapon.

The weapon is fairly simple in design. It's pretty much what it's name suggests. The hero whacks the intended target with the hivey end, a swarm of angry bees comes out and if the hero is lucky, stings the monster. If the hero is not so lucky, then some stings will come his way too. Disadvantages: Hives aren't all that tough, so after only a few whacks, the hero will probably need to seek out another hive, and immediate medical attention, especially if allergic to bee stings.