Become the Nth member of the guild “Guild Name”

From GodWiki
Revision as of 11:27, 30 April 2018 by Djonni (talk | contribs) (Djonni moved page Find a Guildmaster and beg him to enroll me in the *guild name* guild to Become the Nth member of the guild “Guild Name”: Moved to match the quest name as it is now.)
(diff) ← Older revision | Latest revision (diff) | Newer revision → (diff)
Jump to: navigation, search 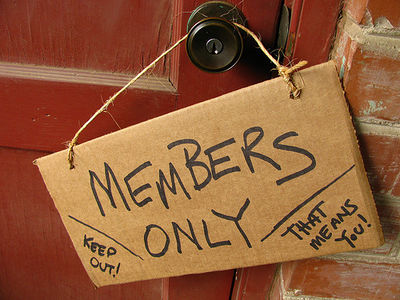 As we all know, this is the only way to get inside a certain guild. A hero goes through the trouble of finding a Grand Master of a guild. Once found, the hero falls to his knees and starts BAWWWING all over the floor, drenching everything with his tears. The Guild Master eventually becomes embarrassed and accepts the n00b into his forsaken cult. That is usually how it happens. Another way is when the God decides to invent his own guild. Since there is no actual Guild Master, the hero finds a lonely bystander. The hero harasses the innocent victim until he/she decides to go along with the demented being and "enrolls" the hero into "their" guild. Such is the way of life.

The challenge in this quest is finding said Guild Masters. They are known to live in the most inaccessible places to make sure the newbies are worthy of entering their group. Some have been found atop mountains, hiding in the Limestone Labyrinth, or disguised as old ladies. The only way to recognize them is by the badge they wear. It contains a symbol of the guild and a the words, 'I AM A GUILDMASTER OF "guild name"!' Heroes must have a keen eye to spot this badge, even if it is the size of a roll of toilet paper. IQ aside, our little bundles of joy manage to find a Guildmaster in about half a day. Some Gods, however, have come across a tip. Supposedly, since there are many Guildmasters, if one is too hard to locate, a hero should simply look for another from the same Guild. This has been proven to reduce time spent on the quest.

Tip: Guild masters love presents. Bring them a home-made cake and they'll let you in in no time.

As with any quest, if your hero has embarked on a quest to join a guild you don't want them to join, you can command them to abandon your quest (or similar; see how to cancel a quest), and, with luck and persistence, they may listen. Eventually.

Should you wish to pester and cajole your hero into starting this quest to join a particular guild, you can send them a godvoice such as join the "Guild Name" guild (including quotation marks). See joining guilds for more.