The Atomic Kitten (Atomicus felinus) is one of the most, if not the most, explosive and radioactive monster in Godville. This small and cute furball looks just like any normal kitten, except for it's eyes that has mutated into atomic symbols that warn predators of its' bombshell nature. However, the rest of the Atomic Kittens' physical appearance serves as a trap to lure helpless victims, be it other monsters or heroes, and turns them into mindless slaves that fulfills its' every whim and to assert its' dominance over other beings.

They hate forests, undergound caves, houses, or anywhere where the sun doesn't shine. Low altitude and cold places also hinders their digestion. They also hate places with a lot of water, snow and rain. 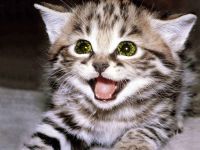