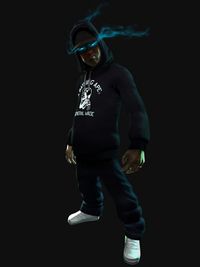 Once upon a time in Godville, a new hero was born. But this was no ordinary hero! Pluizig lived in a time of poverty and was raised as any other kid, but at the age of 14 months, something special happened! Something to remember.

It was the 25th of December, a cold night in the town of Godville. Everyone was celebrating christmas, everyone except Pluizig. He had heard voices since a few days, but he could not hear them loud enough to understand what was being said to him. He could only make out parts, until that night. “They shall go on a journey, follow they heart and I will guide they on your quest!” As impressed as Pluizig was, he packed his stuff and went on his journey to find out what this mysterious voice in his head meant.

Ever since, Pluizig has been traveling around the lands of Godville with support of his personal God. Together they will not stop, before they have reached their goal.

Pluis and his young hero Pluizig

The first of June is known as Pluis Day. The people of Godville use this day to honor the God Pluis. In return, Pluis chose one man to become his special hero, and through this hero Pluis communicates to the people and lets them know they are still loved by their God.

Ever since God Pluis took care of Pluizig, Pluis encouraged his young hero to go on quests, fight with monsters and become the mightiest of the mightiest in Godville. The constant support of Pluis kept him from the evil path to fight for the good of mankind. On his journey he came across many towns, guilds, monsters and his pet firefox Sven. After being a member to some different guilds he decided to join the DraGoons Of Pretentious Evil.

Pluizig has always been loved by his god Pluis and therefore always been on the path of good. But the 1st of May 2012 was a day that would not be forgotten: Pluis got his first ever punishment for spending another pocket of gold on beers at the local pubs! "There will be a change!" his God yelled down from the skies. "From now on you will not walk the path of light anymore, but become stronger than any other hero and walk the path of evil. Steal the beers from the pub, collect more Golden Bricks than ever and proof yourself God-worthy!"

The Quest for the perfect guild

When Pluizig finally reached the level of 12, Pluis thought the time was right for Pluizig to go and find the perfect guild. Many guilds have been tried and even more have been left. But after months of trial and error the perfect Guild had finally been found. The DraGoons Of Pretentious Evil were the perfect fit for Pluis, even though he was always kind-hearted. Pluizig has been a member ever since and earned the title Advisor.

May 12th 2012 - The April 18th update was quite the miscalculation! Almost a month later Pluizig has finally reached the Cardinal rank and will probably not join other guilds anymore. Lucky God Pluis! 5% more God Voice to use!

According to the Goddess of Firefox

Pluizig's personal achievements are recorded on a special page of his diary: his Profile Page. His living adress is top secret, but if you find Pluizig's Diary, please return it to Wrath of the Gods Lane 7, 0001AA Godville.

As of 9th of April

This is what the finished temple will look like!

The temple of gold is the most important quest all hero's should finish as soon as possible. It is a sign of showing their love for their Gods and a place for other hero's to worship that specific God. This way Gods gain more Godpower to influence their hero's even more.

Pluizig has had a rough time getting in the Pantheons of Construction. He had to collect 150 Golden Bricks to get ranked, but 150 is alot more than he thought at the beginning! Weeks, even months were spent collecting this amount of Golden Bricks and finally the day was there! Pluizig got his God Pluis ranked in the Pantheons the 4th of May! Every single day the hero does his very best to collect as many Bricks as possible with the help of his God. The money he collects is very interesting to be spent on beers, food and other useless things.. Therefore Pluis has to remind Pluizig every once in a while that he can convert 3k gold into a Golden Brick. Even though Pluizig might not listen every time, his God Pluis pushes on by commanding Pluizig on his journey to "Dig for treasure!" every once in a while. This temple of Gold shall be finished!

The Hero's Ranks in the Pantheons

Every Hero competes for the number 1 rank of every pantheon, but only one can be the best! Unfortunately I am not among the best, but sure am I proud of my achievements! Scroll down and be scared by Pluizig's achievements!

Pluizig's Pantheon Rankings as of the 12th of May.

It's the 16th of February when Pluizig finds his first pet ever. As of the 3rd of March Firefox Sven is level 7 and aiding his hero whenever Pluizig is in need for help.

26th of March - Today Firefox Sven gained another level and is now level 12! He is training so fast, I almost can't believe it. Sven also got a new personality of the list of Pet Personalities and is now Virtuous.

9th of April - Sven got his Pluizig in the Pantheons of Taming by becoming level 14. Training continues to get the Firefox as strong as the number one pet of all of Godville!

5th of May - Time is passing by so fast! Sven is still jumping around alive, taking care of his owner. As a level 17 Firefox he has nothing to fear and the only important thing now is to end way up high in the Pantheons! For Pluizig this is a very important time: Sven is almost strong enough to be tamed. This will get Pluizig his first medal, but is he worth it? Only time will tell..