Unity is the value by which Guilds are ranked in the pantheon of unity.

Spode   has discovered the formula for unity:

This is the formula for the Artificial Modifier, discovered shortly after by Spode after a lot of experimentation:

Notes on the Formula

Written before the formula was discovered, but fits nicely:

The unity of a guild depends on the 'cohesion'[1] of its members. This means that a guild with lots of members joining but an equal lot of members leaving will have a low unity and a guild with lots of members joining and hardly any leaving will have a high unity. The unity seemingly depends on these two rates (members joining and leaving) and the total number of members. It is believed that these two factors make up the bulk [2] of the unity value if not the whole. Since the exact formula used to calculate unity is not currently known, we can only make observations and generalise, to reach the aforementioned conclusions. The fact that 'oversized guilds might be easily dragged down to the bottom of the pantheon'[3] implies that there is an 'artificial modifier' as it has become known.

To summarise , Unity is calculated (we think) by combining these three factors in a certain way:

If J=L, then unity stays the same. If the ratio is J>L, then unity increases. If J<L, then unity decreases. This is likely because the unity pantheon is only updated twice a day meaning it is possible to compare current data with previous data. This join:leave ratio would not be possible to take into account if the pantheon was updated constantly as the data changes, like in most other pantheons.

2) Every guild member has added a certain amount of unity points by the end of the calculation. This is most likely to be guild rank based, providing a certain amount for each rank (so the more high-rankers such as advisors, grand masters and cardinals the better).

3) The lower you are in the pantheon, the more the two above effects are amplified. This “artificial modifier” could have an effect like 100pts at first place would be worth 200pts at fiftieth place. This keeps the leaders changing. This "artificial modifier" is likely to just be a result of the way the unity score is calculated; that the current rank in the pantheon is taken into account during the calculation. This implies that there will be some sort of inverse proportion law (Y=k/x) [4] in the actual equation; the higher you are in the pantheon, the harder it is to prevent unity decreasing. Sketched on a graph, the unknown quantity (the result of the calculation before pantheon rank is factored in) against the pantheon rank would appear extremely similar to the graph below where the gradient would be the unity score. 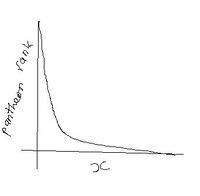