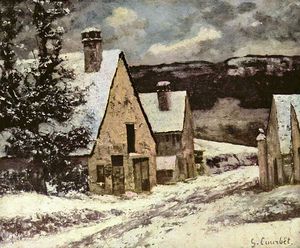 Trollbridge is a freezing cold town with a population of about 50,000. It is located in the most eastern region of Godville and is overlooked by The World's Apex.

Not much is known about the history of this town, but there are countless folk tales of which none can be trusted, mainly because literally every single one of them contradicts all the others. Many tell of a period when the weather was sunny and benign, and the tourists flocked by the dozen to visit the golden beaches. It is at this point that all the stories diverge and some speak of a fictitious war while others tell of an environmental disaster of epic proportions which changed not only Trollbridge but all of Godville itself. Historians commonly document a heavy meteor shower which plunged Trollbridge into its present state around 20,000 years ago. Much to the chagrin of many travelers to this place, the dilapidated looks of it haven't changed much, except for the meteor crevices littered around the entire town.

Some hundreds of years ago, the largest Cold Turkey flock of Godville started frequenting this place.

Here, it is too cold to snow. The air blows off the overlooking World's Apex mountain range, filling the air with fine ice crystals. It is one of the coldest places in all of Godville, yet it still attracts one or two tourists. The land is frozen solid and crusted with ice and the occasional patche of moss. There are not many landmarks around here, except for the Low Gravity Plains to the south and the River Amp to the east. It is recommended to wear sunglasses here to protect from snow-blindness. Also, due to its unique location on top of a large vein of magnetic iron, legend has it that compasses will never point north. Instead, they have an annoying habit of spinning exactly 360 times before randomly pointing to a direction, which still isn't guaranteed to be the real north. 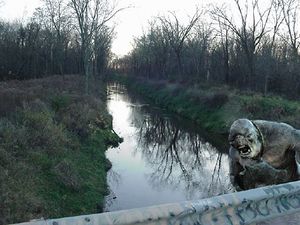 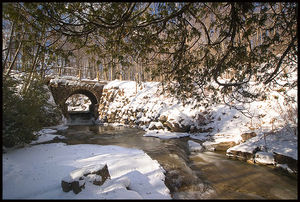 At the time this photo was taken, the Troll Booth Attendant was sleeping in its booth.

The main feature of the town is a lonely bridge across the shallow, white, and treacherous River Amp and its deep valley. A Troll Booth Attendant who inhabits a booth underneath the bridge sometimes taxes those who pass over it, and those who refuse to pay are trolled to death. It is from this that the age-old legend of trolls under bridges stems. Unfortunately, crossing the bridge is the only way to enter the town, so make sure your hero brings a lot of gold coins.

Trade suffers due to the town's location. A trader not far outside the city often saves heroes from having to take the trip across the bridge and its accompanying Troll Booth Attendant.

The streets are often deserted due to the weather, but they are filled with millions of gold coins. It's unknown why this is, but the average hero won't be smart enough to actually think of taking any. Parts of the cobbled roads that aren't covered in coins are strewn with waste. Most residences here are log cabins, and the people emerge from these to do business at the port in the occasional period of respite from the otherwise ever-raging gales. The port itself is a dreary affair where passing ships may sometimes be seen.

Arctic Monkey is often hunted here for its fur or its distinctive sound.