The Solar Bear (Ursus solaris "solar bear") is a gargantuan monster of the bear family closely related to the Bipolar Bear, but much larger and more ferocious, and therefore much more dangerous.

Long ago, Solar Bear ancestors traveled southeast from the frozen tundra plains to the great deserts and magma plumes that surround San Satanos. The plumes and radiation caused great mutations in the bears. While many died from the radiation and plumes, those that lived to reproduce passed great powers and strength to their children.

At the same time, they began to witness subtle differences between them and their bi-polar bear brothers. These differences lead to a minuscule separation in the bear family tree, which in turn, increased over thousands of generations. Instead of being a relatively small half ton, five foot, white furred bear, they evolved into their current enormous form.

A full grown Solar bear measures 12-14 feet in height and weighs 10-12 tons. Their fur can be black or white. They commonly have glowing crimson eyes and 7 inch razor sharp bio-ceramic enamel plated claws. Their saliva is acidic, corrosive, and can dissolve a hero's flesh in seconds. Exposed flesh and bone wounds are common from their constant battling with each other. Their lack of pain receptors and increased healing ability make them undoubtedly one of the hardest animal to kill in all of Godville. 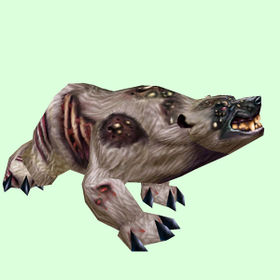 Solar Bears are aggressive creatures with unique healing capabilities, from which they derive their name. While a Solar bears main source of nourishment is the flesh and meat of their prey, they also gain energy from the sun's rays, which sustain them and regenerates their wounds.

These pets are very loyal and take care of their hero as long as their hero takes care of them. Their typical lifespan in captivity is 20 levels or more

Though it is rumored that solar bears are drawn to serve masters of the purest evil hearts with the strength to tame them, they have also been seen bonded to the truly righteous. They also love a delicious bass and are good with a bo staff.

Once tamed by a daring (or naïve) hero, a solar bear will gain a "pet personality" once it reaches level three that will randomly change every 3 levels gained afterwards. The personality will be displayed next to your pet's name surrounded by « and ».

A list of all possible Godville pet personalities can be found on the Pet Personalities Godwiki page.