The infamous S&M guild is one of the most influential guilds in all of Godville. Many people think they know what the S&M stands for. However,

Mike-Almighty 庙畜  has leaked the true meaning of the guild as the ultimate "Soldier & Mercenary" guild with the long version as "Soldiers of Gods, & Mercenaries of Fate". 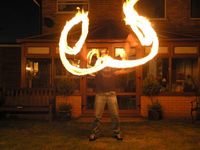 On the eleventy-first and one thousandth day of Creation, the S&M guild founding members met when they were both hired to fight a town-destroying monster named Rickardo. Silus, a soldier who had recently retired, and Minus, a mercenary who needed money to pay his cable bill, considered ways to defeat the menace. After 3 dozen donuts and a keg of brew it was decided to simply light Rickardo's mustache on fire. Little did they know this feat would prove to be Godville's first epic quest, one that has never been repeated.

After courageously slaying the giant mustached menace, the whole town thanked them and thrown a huge party. The party was so huge that the whole town was flooded with beer. The heroes got drunk and woke up in the middle of nowhere beside a small fort with a kiddie slide attached to it. This structure was rumored to be S&M's first guild hall that the two brave heroes built from intoxication and this fort was never found again even by very skilled and well-known archaeologists.

The S&M guild is the most difficult guild to enter, as many applicants never meet the full requirements to be initiated. In order to become a full member of the S&M guild, the hero must be chosen and tested in skills desired by the guild. Some of these skills include:

This ingenious way of recruiting members has made the S&M guild a desired guild to be in because wearing the badge displaying the S&M crest demands respect. Respect not earned by fear, but by honor and dignity.

Right after the applicants passed the requirements, they are bestowed with the S&M badge and a membership card that they can use to show in any establishments in any city of Godville for free stuff, services, and discounts in partner S&M establishments, and be recognized as a legitimate member of the guild. At this point, they are tested for their loyalty to the guild to know if they deserve to be a member of the guild.

Many have falsely laid claim to inventing the internet. While the guild is not one of those, S&M of the olden days did invent the only way to correctly enter a net. This technique eventually led to a flawless monster capture and kill tactic.

After learning how to enter a net, they began working on ways to exit the net. Once completed, they got good, real good!

There are many stories of the influence that S&M has had on the world, some of world shattering importance as shown below.

!The Diary of Maritae of Stories↻
10:24 Well-known archaeologists found out that beer was actually invented by 'S&M' members! This piece of news spread across the town, filling the people with awe and gratitude for my guild.

!The Diary of Kaldo The Barbarian↻
The local tavern owner suddenly proclaimed 'Free beer on behalf of the “S&M” guild!' Looks like my guild is getting great recognition in this town.

Onion Lover did his duty to spread the word of the guild's wonders in the town square of San Satanos. Nobody listened to him until his goddess bestowed upon him an official document stating the relationship between the town and the guilds leader.

!The Diary of Onion Lover↻
05:56 Suddenly felt movement in my pocket and pulled out an official document stating that the leader of "S&M" is a descendant of the town's founder. The citizens of San Satanos seem to like us a lot more now!

Past and current Guild Leaders: