Pirate of the 7 Cs

The Pirate of the 7 Cs (Marinus scourges) is a fearsome monster usually found in Atlantis, the newly conquered adopted home of the pirates, but it is also sometimes found in other wet areas of Godville.

Common knowledge has it that the 7 Cs actually stand for Creepy, Caustic, Cut-throat, Cold-hearted, Cold-blooded, Callous and Collector. (What he actually collects is still a well-guarded secret, although there have been rumours...)

Initially, there were several of these Pirates, but due to their inability to be on the same planet as each other, and something about not taking orders from anyone else, there appears to have been some sort of intense battle, which resulted in the Pirate of the 3 Cs adding a few adjectives. It is unknown just how many pirates remain in the wild, but they are believed to be a very endangered species, mostly from each other.

This monster's favourite pastime seems to be relieving tavern owners of their rum and then paying for it with gold he stole from them in the first place. 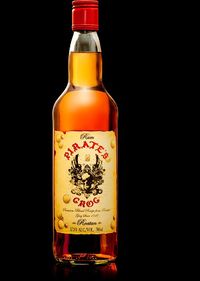 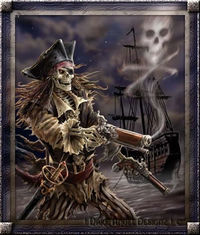