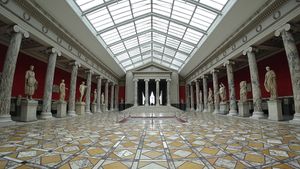 If you are competitive at all, chances are that you'll want to visit the Pantheons every so often. They are Godville's leader boards. The Pantheons rank different things within the game: some rank guilds, or the most powerful heroes and heroines, for example. These leaderboards constantly change. Most are updated hourly, but a few are only updated a certain number of times per day.

Before the May 2012 update,[1] there were three categories of Pantheon:

In May 2012, at the same time as the Pantheons of Popularity, Duelery, Mastery, and Templehood were introduced,[1] the Pantheon classification system changed. There are still three categories:

At the beginning it is extremely difficult to climb most Pantheons, but it gets easier as a hero's level increases. Some Pantheons are exclusive to certain groups, and others are open to all. Difficulty in gaining or maintaining a high place in each Pantheon varies greatly with the Pantheon type, and some change more quickly than others.

It is impossible to have a high position in all Pantheons at once. Gods and goddesses must prioritize different Pantheon statuses and in-game achievements, forcing them to budget their power.