Calling all gods, goddesses, heroes and heroines of Godville!

Let us bring about an end to competition and rivalry!

Let us, the citizens of Godville unite as one, and move away this system where we are split into separate guilds, and the division that comes with it!

Every hero starts out as a member of no guild. Then until recently, upon reaching the 12th level they were forced to choose a guild – whether they liked it or not. Now there is another way, for now you can order your hero to:

By making this bold choice, you are joining with those of us who have also pledged their allegiance to no guild. We are united by our common goal that one day everyone in Godville will be a member of no guild, and the era of rivalry will be at an end!

If your hero should lose sight of our cause and begin a quest to join a guild, simply command him to:

There will always be those who ask us (skeptics that we are) whether there are any guilds who we would recommend above the rest. Our reply is, and always has been that no guild is more deserving of your loyalty than any other guild! Indeed, understanding this simple truth is fundamental to our cause, for it is the very reason why we all should choose to join no guild.

In the past, some (sad, confused) individuals have accused us of actually being a guild. Infidels I say! We are no guild! ;)

The leadership of the cause is known as the Guildless Council (GLC). It currently consists of:

Our "members" are known as the Guildless, with a capital G.

We have an in-app chat system where we offer camaraderie, support and advice to followers of no guild, and where we hold council to discuss what to do about the problems caused by guilds. We call this Guild Council. 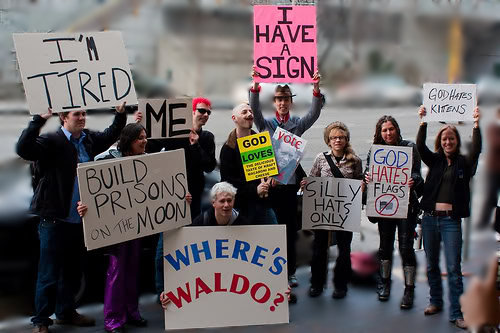 Naturally, any alignment is welcome. To us there is no good or evil – only part of the problem, or part of the solution.

We welcome gladiators and non-gladiators alike. Those of us who go to the arena, fight to ensure that it is dominated by no guild!

How to support the cause

While in town, you can win influence for our cause by punishing or encouraging your hero(ine)! Guilds continually fight to horde town influence and its rewards for themselves, but we believe that it belongs to the people of Godville, and is the property of no guild!

You can also help us by encouraging more heros to join the protest, by leaving their current guild and becoming members of no guild! However, please avoid actively recruiting anyone from an active guild (as a general guideline, this means any guild which has posted on their thread within the last 2 weeks, though a degree of common sense can also be applied). If their hero has not yet joined a guild, you can encourage them to keep it that way!

For a united Godville, let no guild reign!