Monsterdam is one of the recently "rediscovered" cities of Godville, which is strange, because it is also one of the oldest cities on the continent. Of course, as until recently the inhabitants of the city were generally referred to as "Monsters," it never made its way into the "See Godville in 300 Milestones or Less" guides sold by traveling hot-dog vendors throughout the realm. It has an official population of 2900 inhabitants. However, Monsterdam census responses are notoriously unreliable (almost as unreliable as those from Beerburgh) on account of census workers being eaten by undocumented Multi-legged Luggage.

It is rumored that the mayor is secretly controlled by a Mind Boggler, and that Monsterdam is the “Tradeburg of Monsters” with a massive underground monster black market in the off limits Monsterguild Caves.

These rumors are not hard to believe, since an unexplained majority of the town’s tax revenue goes to maintaining the largest (and only) monster orphanage in Godville. Medical supplies for heroes especially are taxed excessively, making getting proper healthcare agonizingly slow — quite literally.

The city's main feature is the central market, built by Lord Pullcart, the Trojan Horse founder and architect of Monsterdam. It features the Monsterguild caves, large naturally-occurring holes in the ground that each monster guild decorated with parts of dead heroes. The central cave, the Horsehouse, has several rooms of broken down gear from defeated heroes which Trojan Horses in training decorated their manes with before going into battle. These caves are nowadays off limits to the public under orders from the mayor. Heroes would often get lost in the caves, or worse yet, make it out and spread strange rumors about a secret underground monster city.

It is unclear why the city was abandoned by the founding monsters, but most theories revolve around the lack of highly caffeinated, overpriced, and increasingly complexly-named drinks.

Some founding monsters might still remain, as it is whispered that the oldest double dragons, having reached near invisibility as they got smaller and smaller, come out of the abandoned temples and beer halls at night to wreak havoc with the sanity of the inhabitants while keeping visiting heroes well entertained. 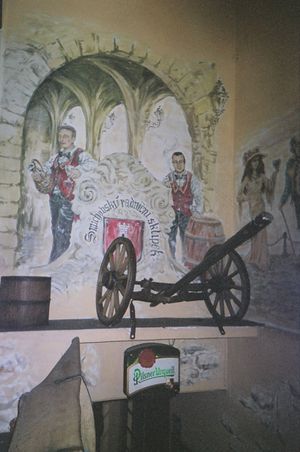 Entrance to the Balsamic Cheese Inn

Vendor information as well as general data on accommodation and amenities remains sparse. What is known is that there are, apparently, showers. It is not known, however, if those showers work, or if they use clean water. Although recently, researchers have suggested that it is possible that they are powered by the screams of fallen heroes, so it is recommended that a mockingbird is tamed by those who travel here.

Sometime in the Third Age, a cheese trader from Godville, traveling to Tradeburg to sell his wares, stumbled upon an abandoned balsamic vinegar shop hidden behind large piles of discarded candy wrappers. He quickly established that he could claim rights to the location, and opened up a shop and inn for traveling heroes either too lazy or too drunk to make it to Tradeburg.

The Balsamic Cheese Inn opened for business, closed, and was abandoned all within several hours. Of course, a Double Dragon named Kzeevicks was blamed. This was easy for all those concerned, as Kzeevicks had never been seen and refused to come forward either to defend itself or take the blame. The Inn quickly opened under new mayoral management. A large sign at the entrance promises to severely maim any double dragons entering the establishment. A dwarven cannon hanging above the front door reinforces what most patrons now believe to be this useless point.