Midnight prominence is a signature drink of ♛ Kings Queens midnight tea party with Alice and some anonymous rabbits ♚. It will be served and given to those who made great relationship with the guild. You can put this as an achievement of friendship into your personal user wiki or hero wiki. Click the link to redeem achievement : Midnight Prominence 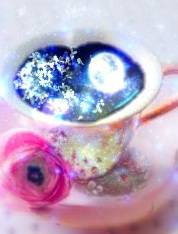 As all teas comes from the same type of tree, Camellia sinensis, so does midnight prominence too. However, there’s one distinctive feature from it with others, where it is planted in the Meadow of Everlastingnight, a place where no sun will rises but only the moon that plays around. In which means by the tea plants is grew at a land with no sunlight, only feeding on moonlights.

Midnight prominence is a combination of both white tea and black tea. White tea are in which using young and green tea leaves to brew the tea while black teas uses dried tea leaves which undergo full oxidation. For midnight prominence, the white tea are leaves from new shoot picked only at the full moon period where the leaves are at most active time of absorbing moonlight. While black tea leaves are obtained from the wilted of the entire tea plant, as due to the lack of sunlight, the life of midnight prominence tea plants have a shorter life span. The tea plant will release the strongest fragrance and flavor at the last moment of its life, giving a perfect choice to be brewed. In addition, midnight prominence is blended with a special flower, queen of the night. Queen of the night is a flower that blossom only once in a year and last only for a night. The flower is picked when it blossoms and set dried under the moonlight.

Midnight prominence special brewing which it does not requires any hot water. It is mixing up 3 types of ingredients which is midnight prominence’s white tea and black tea, and moondried queen of the night. The water is obtain from the dew that lies on the tea leaves which is harvested in the night of new moon. As white teas are using leaves that is still green, the tea leaves is still alive while it submerge in the water, bringing continues fragrance to the water. The black tea is blended into smooth powder, and added into tea where it dissolves smoothly. Last, queen of the night is added into the tea infusing flowery fragrance into it.

Brewing proportion, each time midnight prominence is brewed with a Jar, in which contains full jar of dew water, 5 teaspoon of white tea, 3 teaspoon of black tea, and 1 queen of the night. The tea is set aside for a half night to let the ingredients to infused fully to the tea. Before serving, the tea will not be allowed to contact with any heat source, even human. Once they’re heated, the infusion will stop. Thereby it is only allowed to be touch by the lips once it is fully infused. The tea cups and jar are submerged in cool water, to prevent any heat transferring to the tea.

Midnight prominence is served chilled, or to be more precise, it is a tea that is always in a low temperature due to its magical essence from daily exposure on the cool breeze of the midnight and the refreshing dew that is collected at its coolest time. Every sip of midnight prominence will be felt with coolness from the lips, right sliding through the throats and slips into the belly. This refreshment is the pure indulgence of teas with the midnight itself. It brings a light flavors on teas and fragrance of queen of the night flower. When you close your eyes, you still could able to feel the essence of midnight with the cooling breeze with the fragrance of flowers.

Fragrance : ★ ★ ★ ☆ ☆ Clean and light fragrance of tea and flowers, not too strong, just perfect.

This signature tea is so perfect that even Kings and Queens in the castle favors it. They held tea parties at the midnight just to enjoy the refreshment of midnight prominence