The Khaki-colored Dragon is a large pub located just outside Godville’s arena. An average weekend for the regulars of this pub is a day spent watching the fighting at the arena, followed by a night of boozing in this fine establishment.

The Khaki-colored Dragon used to be a perfectly ordinary pub with an unusual name. However the pub owner experimented by painting the roof and found that business improved immensely. Soon he had to make other, more eccentric changes to keep customers interested. 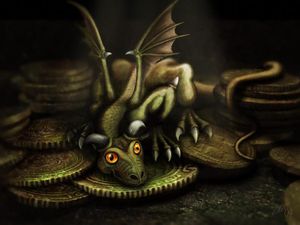 Barney resting on the gold it won by entertaining patrons.
Retrieved from "https://wiki.godvillegame.com/index.php?title=Khaki-colored_Dragon&oldid=104039"
Category: