Guildy Pleasures is a guild which places emphasis on amusement, gratification, and general contentment with life. The guild aims to play a pivotal role in the enhancement of such qualities. Specifically, members are encouraged to indulge in those things they enjoy but which may be poorly regarded by the community at large. Here, campy movies, lowbrow art, and conformist music may be relished without fear of ridicule.

Very little information on the origin of the guild has survived to the present. Most tales were passed on through oral tradition, but the party culture of Guildy Pleasures doomed such folklore to grave distortions and in some cases, complete loss. The implications of members' unreliable memory and mischievous tendencies for posterity was clearly a concern for a time, as there is evidence of a temporary shift toward written historical records. However, only a few charred remains have been found, as the records department was a box located beneath the stage in the main ballroom of guild headquarters.

At present, the sole intact record of Guildy Pleasures' early history is a single stone tablet dated Day 627 g.e. which reads as follows:

Scholars are largely in agreement that the "Las Vegas" referenced therein is a town as yet unmapped by the cartographers of Godville. Several expeditions have been launched in an attempt to locate the lost city, but the mission was quickly abandoned when nearly 80% of the explorers did not return within expected time-frames. Those who did simply stated: "What happens in [Las] Vegas, stays in [Las] Vegas." Researchers are currently investigating technologies that might allow future missions to bypass such metaphysical barriers.

The nature of Guildy Pleasures' early history as described above is further supported by the era that followed. Named for the signs posted at all meeting-house entrances, the "Quiet Please" Era was characterized by an almost complete absence of partying. Disco balls hung still and unlit for months at a time. Energetic recruits often burst in, eager to join in the famously uninhibited festivities, only to be met by long-time members clustered in a dimly lit corner with damp washcloths over their eyes. For this reason, it may also be referred to as The Dark Ages.

It seemed to outsiders that Guildy Pleasures was permanently burned out. Many original members had left the guild in an attempt to appease deities who had abandoned them in frustration. Others remained, their memoirs clarifying that this was simply a much needed respite from "La Fête Sans Fin," and citing the founding philosophies as too valuable to relinquish even in times of extreme fatigue.

The remaining members made a full recovery, and soon became restless. The time was ripe for a revival of the guild to its previous glory. However, so much time had passed that the party had to be started from scratch. Supplies needed replenishing, decorations needed hanging, music needed playing. However, the most pressing issue was that nobody was talking to each other.

Thus, a series of games began, for old and new members alike, in an attempt to acquaint everyone. Aspiring to reproduce the splendours of yore, in which high-energy unselfconscious randomness prevailed, one such "game" consisted of yelling unconventional getting-to-know-you questions at each other, preferably involving food items or kitchen utensils.

Such activities failed to generate the shindig of the season, as intended, instead developing into a rather awkward form of chaos. Inexplicably, revivals have sporadically continued to this day.

Upon announcement of the new Guild Leader feature, the senior-most member of the time,

The Purple  , immediately investigated the elections system and found that by clicking "nominate" she had unwittingly announced her candidacy. To avoid embarrassment, she proceeded with a phony campaign which failed due to poor voter eligibility and turnout.

Guildy Pleasures continued in a pleasant state of anarchy for several months, though members occasionally expressed a desire for the air of legitimacy a leader would confer. Heightened activity of the gods while their hero(ines) were visiting towns resulted in another fateful accident: reaching the top 20 in the Pantheon of Popularity. Though few active members would be affected by the custom high-level rank, now unlocked, the requirements for designating a totem monster seemed achievable as well. And so,

Le Buff One   and

The Purple   set out to climb the ranks of the Pantheon of Duelers, and chattering of potential mascots filled the council chambers.

As the dueling season drew to a close with both members safely in the top 100,

The Purple   once again submitted her name to the elections, this time intentionally.

Le Buff One   campaigned on her behalf, but no other eligible voters at the time were active council-members, so the outlook was grim. The first lucky break came when it was discovered that

Gawkytuba   would rise to the rank of cardinal during the voting period. The second, when long-time lurker,

At the time the polls opened, though, one vote was still unaccounted for. Days passed, the sole candidate's thirst for power had grown, and an uneasy desperation lingered. Now in the final days of voting, without a word to anyone, a familiar name appeared in the list of votes.

DrahcirAloer  , once active but assumed to have abandoned his hero, had mysteriously contributed the final vote that would make history. 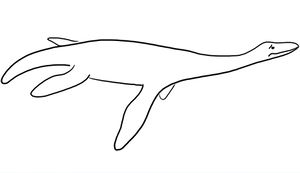 The Guilty Plesiosaur has been adopted as the official mascot of Guildy Pleasures.

A guild tartan is rumored to exist, but pattern details remain vague, may involve polka-dots.

The official song is a series of improvised whistles as performed by 2 or more persons, in which none are in the same key or tempo. For those unable to whistle, loud humming is the recommended substitute.

In addition to its use at formal ceremonies, temple celebrations, and raucous parties, it may also be performed by townspeople to honour visiting members of the guild. 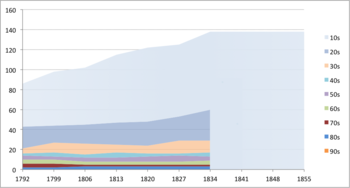 The guild has growing, young population.

Guild membership is open to any citizen, squatter, or medical tourist of Godville. Guildy Pleasures does not discriminate on the basis of personality type, level of experience, level of wardrobe silliness, or current tribble load.

Interested deities may enroll with their follower simply by sending the following voice command:

Before sending, one should ensure that spelling "correction" technology has not desecrated the guild's name. 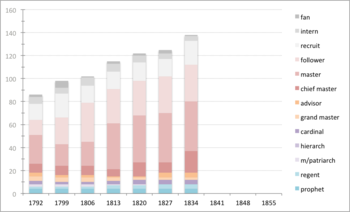 Guild loyalty has led to a rise in the number of high-ranking members.

The current census program is a relatively recent venture, thus, very little data has been analyzed in order to provide meaningful information about the guild to the public. However, a limited number of fancy-looking graphs have been revealed, which give careful consideration to colour schemes in order to distract viewers from a dearth of meaningful content. The majority have been rendered in a stacked bar or stacked area format. Those interested in line graphs might like to proceed to the section #Public Perception, or register a complaint with the demographer.

One finding which may be asserted with confidence is that the population is growing. The guild's rising headcount may be further understood by following the changing ratios of members at different ranks. By evaluating these numbers in relation to member levels and to the guild's standing in the Pantheon of Unity over time, guild demographers hope to better understand these interconnected forces, while also making lots of pretty charts and spreadsheets. 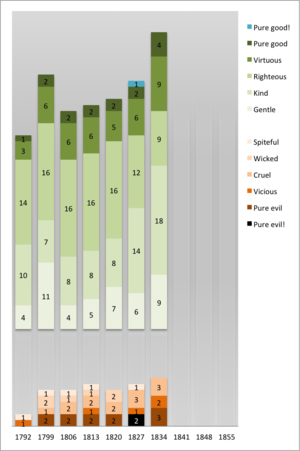 Number of members of each personality type, excluding neutral 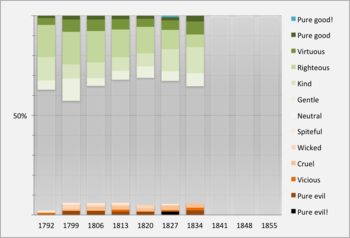 Personality types as a proportion of all members

Though the official alignment of the guild often reads simply "bright" or "humane," Guildy Pleasures is home to a variety of different personalities. While it is true that most active members pursue the good path, they do so to different degrees of intensity, as illustrated by the degree of colour saturation in the accompanying graphs. The proportion of purists at either end of the spectrum tends to remain approximately equal. Thus, it is the large numbers of "soft-good" personalities that lend a positive alignment to the guild as a whole.

The first and current Guild Leader is 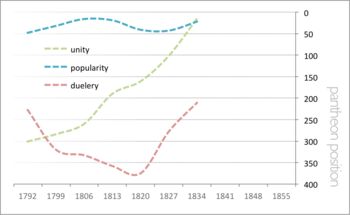 Through the strategic use of unsolicited public art installations, song performances, and "aberrant" weather conditions, Guildy Pleasures has worked to become a household name across the region. According to official records, on day 1806 g.e. the guild was sixteenth most popular throughout the land, though indistinct memories place the actual record high around #12. Notably, one week after the peak at 16, the guild held 4% influence over Los Demonos. Analysts are still working to determine the significance of an apparent correlation between this feat and the ongoing battle between good and evil.

According to the most illustrious opinion polls of the citizens of Godville, Guildy Pleasures is the least annoying guild of all! Which has somehow lead to Guildy Pleasures being the #9 most popular guild as of day 3027 g.e. This popularity is probably due to the 10% guild influence over Monsterdam and 6% influence over Beerburgh. Though such influence is often waning as other guilds crash Guildy Pleasures's parties and ruining our reputations.

Despite making their raucous presence in many towns, members have rarely found mention in the Godville Times. Given the values and lifestyles involved, however, this is likely due to low readership among members as much as genuine editorial consideration.

On day 1830 g.e., due to their relentless submission regime,

Smegle   was recognized in the Ideabox News section: