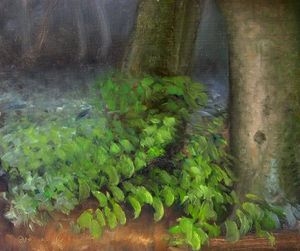 Godvillewood is almost centred between Godville and Deville. It can be found on the eastern side of The Platonic Woodland which overlooks the town. Godvillewood is the fourth most populated city with a population density of 3200 per square mile. 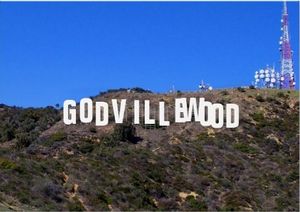 It is a public misconception that Godvillewood is so named for its dense forest surroundings. In actual fact, the town was originally named Verwood-town after the family who ruled it (and still do). As the town began to grow, a great mass of tourists were starting to show up every autumn when the town looks its most picturesque. These mostly uneducated travellers became accustomed to calling the town The one near Godville for ease of identification. Eventually the ruling family got word of this and put up huge banners that said, "The town called The one near Godville is actually called Verwood-town!". The tourists could not read well at all though, having never been to school, and so they misread the notices as: "This town is called Godvillewood!". The name has stuck ever since.

The terrain in and around Godvillewood is rough and uneven and this is because the town is nestled within a huge forest due to the laziness of the inhabitants to start any deforestation and they have grown fond of the way it is so they do not make any bid to change it. The veritable plethora of wildlife in the forest has learnt to live in harmony with the residents due to their close proximity and this, among other things, makes the town a favourite for tourists and especially bird-watchers. Gentle streams weave in and out of the forest, branching out from the River Stinks which passes close by and brings many tourists from Beerburgh. There are three waterfalls which peculiarly triangulate to a milestone. It is often speculated that the milestone was placed there for religious purposes and is not a proper milestone but we shall never truly know. The waterfalls have claimed the lives of many tourists who stupidly attempt to roll down them in barrels and this has led to signs being placed at the tops of the waterfalls which have been defaced over the years and now read things like "Ignore these four words" rather unhelpfully. 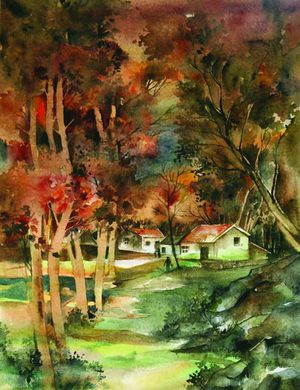 The town is widely known as a haven for tourists and honey-mooners who enjoy relaxing among the wistful trees, especially in the autumn when the whole forest turns a comforting hazelnut colour, which attracts artists from all over. The inhabitants hence make a living from selling souvenirs and other merchandise usually at rip-off prices and the visiting heroes will oblige them most of the time. Apart from its beauty, the town is also known for its large cemetery in which dead Monsters and heroes alike are put to rest. This desolate graveyard spans the whole southern region of the town and depressed philosophers often go there to ponder the futility of life. Most of the town is therefore located in the northern region of the forest where quaint little houses and shops lie scattered among the forest debris. Underneath the cemetery are ancient catacombs, where heroes have been laid to rest since the beginning of time forever and ever and ever and ever and ever and ever... 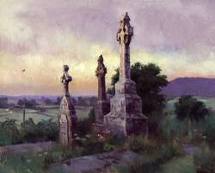