Despite differing opinions on the topic, the scholars still managed to create a kind of measurement for the understanding this concept.

The hero gains a full understanding on the literal meaning of speed, and is finally able to travel at the speed of light.

The hero's comprehension reaches exponential heights, as he is now able to rely on speed itself to stroll around the 5th dimension, also known as worlds. When the hero is bored, he can now decide to take a vacation to a parallel world without letting their god know.

This level of comprehension knows no bounds, but even with this, quite a number of heroes manages to step into this stage. The heroes must be able to beat Laplace's demon, someone who can predict the future by calculating countless variables, in a game of prediction just by using one variable, speed. 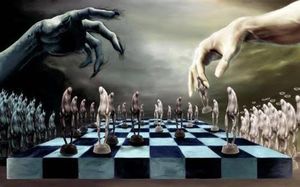 Everything can be predicted by speed, and speed runs everything. Without speed itself, life is impossible. Such is the logic of those who presumably reached a breakthrough in this field. Only by reaching such levels can one truly qualify to define what speed is.