Find a level boss and defeat it

From GodWiki
Jump to: navigation, search
Quests of Godville

#93
Find a level boss and defeat it 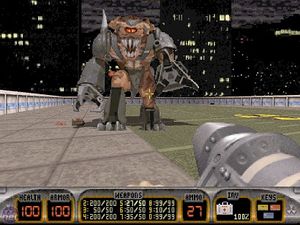 This is the last of a three part quest, with rewards along the way. It ends with a boss fight against a Level Boss.

Heroes are stupid and they tend to forget that at the end of EVERY level is a boss. They seem surprised when they run across one every time. Use these steps in order to progress in this quest:

1) Use techniques for fighting which you are comfortable with. Now is definitely not the time to "try" a new move or spell that you do not know how to make work.

2) Take friends that you trust to help you by either fighting the monster or helping you stay healed up.

3) Do not get too excited about this particular level boss. The next level has another one just like it, I promise.

4) When you think it is dead - WAIT!! Do NOT jump the gun. Heroes are often killed while rejoicing in a victory that is not actually quite theirs to celebrate.

The quest is only considered "completed" when the hero has actually defeated the level boss and moved on to the next area or level. This usually takes 1/2 - 3/4 of a day (estimated).

!Hero's Diary↻
18:42 Notes from the battlefield: The Level Boss was triumphantly defeated! I've got more experience and looted some gold, but it's time to return to my heroic deeds.
Retrieved from "https://wiki.godvillegame.com/index.php?title=Find_a_level_boss_and_defeat_it&oldid=101175"
Categories: