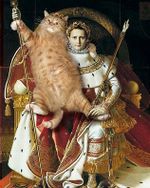 In later ages, after the fall of the empires, Fat Cats tried to find suitable company to grace with their presence and were unsurprisingly glad for hedonism, decadency, and dandyism.