We’d like to welcome you in our guild — Emerald Sky! We don’t care if you are kind or evil. We don’t care what level you are. But, if you want to see an emerald sky above Godville, you are welcome! If you like pies, cookies, candies, cakes and any other kind of sweets — this is your home.

If you've ever read Max Frei books, you are invited! If not... well, you’re invited too!

The guild began on January 13th, 2011 (or 248 G.E.), yet its true origins have been lost in time. However scribes and scholars have gathered fragments of information from across the land. And so it goes:

There was a magical order in the alternate world. To be honest, there were too many magical orders. They couldn't help colouring the sky. It is the Water Crow Order that preferred to look at an emerald sky: 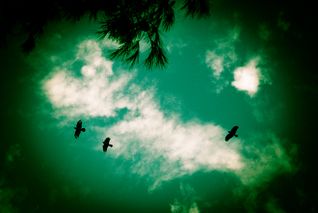 We at Emerald Sky believe, that sight is beautiful enough for all of the Godville Gods and Goddesses to see.

It is also believed that the Water Crow Order funded the construction of the Emerald Sky guild not only by holding fairs and sales involving cakes, cookies, and pies, but also by merchandising peace pipes (STILL available - get yours today). Many argue this case by the symbology of the guild's crest; a man dressed similar to someone accustomed to the magical order, toking on a peace pipe. And even beyond the obvious symbology, the "coincidence" of selling sugary delights IS rather telling of their involvement.

Long ago in a time almost forgotten, before the great enlightenment, most could not read (how in Godville did they survive in a world of text?!?). Thus, they relied on pictograms and simple symbols in order to communicate where words would now normally be used. Emerald Sky has one such ancient symbol of their own: ⛅
This little fluffy cloud, with a playful little sun, showed denizens of Godville that Emerald Sky was a kind and playful organization.

As time moved on and the enlightenment ensued, tombs were written to ensure knowledge was preserved and passed along. Below we have one such tomb that openly displays another symbol; Emerald Sky's abbreviated name. You can see that it is quite old. Currently it remains under watchful eye in the guild headquarters, in Godville. 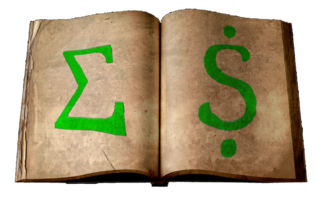 Why does all this matter? Being involved is why...
It is common, and encouraged even, that guild members show their level of support and pride by displaying one of the guilds symbols...


Note: Copy the above symbol(s) and paste directly into your motto, your profiles, or both. They'll look SPECTACULAR! 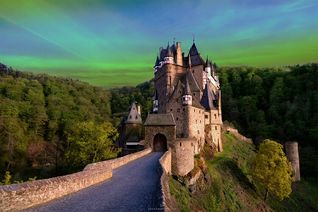 The Guild's Castle; on the eastern fringe of the City of Godville 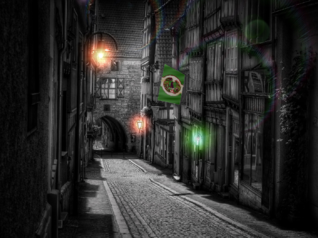 The Guild's headquarters located in the City of Godville

The Emerald Sky Tavern (a Palringo chatroom) is a great place to hang, chat, mingle, and enjoy each others company.

OH LOOK, a fast and easy portal can be found right here: {PORTAL}

ThaiGQ 庙舟畜  - The last leader in the old guild. Served from December 2014 to April 2015. A very favorable leader by the people and was always talking to everyone.

Jamesbob21   - The only impeached leader, the first and last. He served from November 2015 to February 2016. In January 2016 Jamesbob21 disappeared, and was never heard from again. This period in guild history in the stagnant times.

Fenris Sulfr 庙  - Under the reign of Fenris Sulfr the guild grew. Serving from February 2016 to July 2016 was also a leader very in touch with his fellow guild mates. Taking suggestions for high rank and totem monster. He approved emeraldgurus as the guild's highest rank. The totem monster Rainbow Unicorn was also approved after guild discussion. This period in guild history in known as the Renaissance.

Eredog 庙  - Elected in July 2016, the Renaissance continued. Guild prosperity did too! Until Eredog was abducted by aliens, and returned after the elections. Eredog has no recollection of where he went. It is speculated that it was Mars. Could it be

Naun 庙舟畜  - Elected in December of 2016. Ran two consecutive terms. He's one of the more senior members of the guild. This led to a landslide victory, the most popular since Regan in '84. He was the one who brought Eredog back from the aliens, although he also had no recollection of where those aliens were. Also a huge advocate of coming out of hibernation, life's too short to do that. A leader that always speaks, much like the old ThaiGQ from the old guild. Naun is also the guild's designer, blessed with gifts from the gods of art and design. Also the supposed 1/5 reincarnation of Leonardo Da Vinci.

Donishiwa 庙舟畜  - Elected July 2017 after Naun followed George Washington's policy of not running for more than 2 terms. Donishiwa was comfortably elected leader. This election ended the Renaissance, but brought with that the new Platinum Age of the guild. Platinum because Golden Age is too cliched. Continuing the tradition of in touch leaders; Donishiwa is the counselor of the guild. The leader that always asks how everyone is doing and gives back advice when needed. Much like Dr.Isiah Friedlaner, except in this instance helpful and not about money. Winning a second term in January 2018 Donishiwa won a second straight term. Implementing an award system shortly after. A beer based system that takes into consideration miracles preformed in towns. Hangovers are at an all time high because of the reward system, but it doesn't affect anyone because we've all become immune.

Smoking guy 庙畜  Elected 2018. Where will the guild go from here?

Ardni 庙舟畜  and Fionka - Founder of Emerald Sky. Currently bringer of sweets and the Guild Trainer.

Laksmi 庙舟畜  and Faerie - Super sweetie, when she pops her head in.

and Thralla - The guild's most notable lurker.

KCT 庙舟畜  and Boludis - Keeper of the most indecipherable motto.

Donishiwa 庙舟畜  and Jebus Chrast - A newcomer who has been offering good vibes.

Naun 庙舟畜  and Sir Vente - The guild's current wiki caretaker (wiki-taker?) and designer. Also knows how to throw one heck of a party 🎉.

Emerald Dream 庙畜  and Zentabra - The guild's physical manifestation of the holy Emerald Sky we adore.

Amintiri 庙舟  and SirDepot - One of the oldest guild members and one of the most quiet too. Lover of cats 😺.

Lawfully Good 庙舟  and Champion of the Dawn - Bringing light and justice to Emerald Sky.

ThaiGQ 庙舟畜  and ThaiGQ - A Hero that was also a God, one of the last from the Old Guild. Went missing in April 2015. Most likely went off to reach higher enlightenment in a distant land.

Dakotism   and DaKoda - Survivor of the First Era. Has come and gone. May he return again.

Lilkith 庙舟畜  and Lilwon - Left to be with the Knights who say Ni. Will be missed.

Eredog 庙  Eredog has been abducted by aliens again. Searches have failed. Taken to the unkown regions of space, may he return.

Nikki Rikki - 58th-level adventurer, member of the “Emerald Sky” guild, with the motto “( ╯°□°)╯”, stands at the 113th position in the pantheon of duelers under the vigilant supervision of the goddess

Kofa - 67th-level adventurer, member of the “Emerald Sky” guild, with the motto “ For Emerald Sky! ⛅ ”, stands at the 54th position in the pantheon of duelers under the vigilant supervision of the goddess

Nameless Goddess  . We've had many reports that a Chaos Forger has been afraid to make eye contact with him since their last encounter. [Published: 2018-02-02]

Emerald Sky is a group of 38 brave adventurers, climbed at 25th-е position in the pantheon of adventure. “emeraldguru” — that's how elites of this guild like to call themselves. Rainbow Unicorn declined to comment on its relation with this guild. Guild's admission tests include proficiency with “rail-bending” skill. [Published: 2018-02-09]

Your hero/ine is planning on joining us. Yep, you read that right. Listen, they've heard the tales and all the latest rumours. What can we say, we're just that great!


Friends, don't resist it, it's really for the best. It'll all be okay, we promise!


You'll likely see a quest like the one below...

Now, you can beat them to the punch and have them join sooner by sending them the following command:

We're an incredibly friendly and open guild so they're safe here. We've got plenty of entertainment and perks lined up for them - and YOU!

This wiki page is maintained by:

Feel free to add them as friends and ask questions, or simply inquire within!