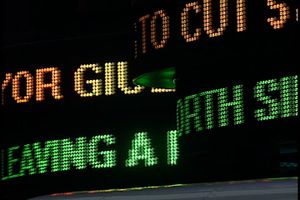 Sometimes a God or Goddess wishes to micromanage the actions of their Hero on a moment to moment basis, but the time it takes information to relay from the ground level on Godville all the way up to the seats of the deity pantheons causes a bit of a delay in communication. This is usually solved through reading a Hero's latest diary entry, but when time is of the essence there may not be a moment's pause for a hero to bring out their quill pen and journal. To combat this, an interconnected system of tubes was laid out to create a broadcasting network known as the Earthly News to monitor events that are not important enough for diary entries, but still amusing enough to catch the attention of the deity watch. The downside to this news ticker style of information is that messages of Earthly News only appear for a few seconds at a time before being replaced with the latest twitch of your Hero's finger, so a vigilant deity will have to keep their eyes peeled for the small cosmic comedies happening right beneath their feet, at this very moment.

The intricate series of tubes that make the Earthly News possible are maintained by the vigilant watch of Godville Administrators, and a hero unwittingly messing with one of the vital tubes used to transmit this important celestial information, usually via prodding with the pointy end of a sword, is a common reason for a hero to be assailed by a Godville Administrator.

When a hero is out questing for their deity (Which they should always be doing, there are no sick days as a hero) the Earthly News will show a bar indicating how far along in their quest they have progressed, while above the progress bar will flash the second to second happenings of the hero, from the mundane to the stupidly mundane, and even the mundanely stupid.

When haggling with a merchant, the Earthly News will show a play by play of each and every artifact sold and how much gold a hero was able to get for it, or if the wily trader was able to snag your hero's hard earned rubbish for free. When haggling a progress bar will appear, but remain at zero percent until all items have been sold, when the trader is finally satisfied and will depart, leaving your hero to either wander through town or continue to quest, depending on if the merchant is of the city or traveling variety.

When battling a Monster, the Earthly News becomes a vital lifeline between a deity and their hero. When jumped by a monster, a health bar for the creature will appear, starting empty and filling up as your hero does more and more damage until finally slaying the beast in question, where questing will resume where it had been paused before the scuffle began. During the fight, second to second descriptions of both the feats of strength of the monster and the lucky blunders of the hero will appear as they trade blows with each other, like a drunkenly choreographed dance of death.