Dogville is a strange little town far away from the others. The citizens here are obsessed with the canine family in much the same way people are obsessed with alcohol in Beerburgh. This is due to the events which lead to the founding of the place (see history below). Tourists are extremely rare here but the population is reasonably large, around 200,000 usually.

Originally a small village on a remote stretch of coast-hugging the World's Apex, nobody can remember the origins of the village, but its sudden transformation into a fully-populated town over the course of a mere century is well documented by many Godville Historians.

It started with the discovery of a huge deposit of rare purple spice under the surface of Mount Helopyla. The villagers quickly set about mining it and in less than a decade they were employing hundreds of heroes to work at the now great mining facility. Their economy quickly grew as they sold the commodity of great value across the whole of Godville.

This was not to last though, for the purple spice quickly became depleted. A recession gripped the town and poverty began to spread. After many years, the town had degenerated to the previous village form.

On one fateful morning, an old man taking his dog for a walk along the coast was halted by his faithful friend. The dog had sniffed out a section of the greatest purple spice conglomeration known to man that was particularly near the surface of the bedrock. It was not known back then that dogs go mad for the stuff. It certainly is now.

From then on, the town only grew in wealth and dogs have since been almost worshipped in the funny old place, even renaming the town Dogville in their honour. It is predicted that the current purple spice deposits will run out in 8090 g.e., but by then it is thought that the inhabitants of Dogville will have discovered some other rarity to mine, as the land is rich with such stuff around that area. 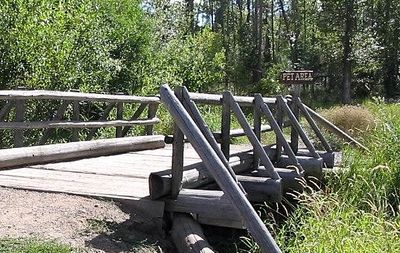 "Pet Area": A bridge entering the area of Dogville.

As previously mentioned, the town lies along a desolate stretch of coast running close by to the World's Apex. The salty wind blows gently and some come here to relax. As a result, behind the whole dog obsession, the residents love to indulge in a bit of recreational sea fishing.

The land around the town is rocky and mostly barren but is a favourite place for mineralogists to go digging; the world's best Fluorite comes from here as well as some prized samples of the rare Crandellite.

The land on which the town rests though is fertile with an abundance of flora. Some snidely suggest this is a result of all the canine faecal matter which must have been deposited there over the years.

The town is famous for its abundance of veterinary surgeries which make pet treatment here cheaper than anywhere else. Pet food is also cheaper than usual but some of the more luxurious stuff may be a little pricey.

The town is an unremarkable little place with few landmarks other than the large mine, which keeps half of the town's inhabitants employed.

The main tourist attraction is a thin man with a headband who lives in a hut by the beach. He enjoys taking visitors for a trip in his small catamaran and is known throughout the town for this. When the seas turn rough, the little boat gets turned and shaken but never capsizes. The man is rumoured to be the son of a god, who was very closely connected to the sea, and his boat is supposed to have been enchanted by said God, to ensure that his son earns a steady income from sea tours and is permanently safe during his sea voyages.

A Gallery of Some of Dogville's Noteworthy Residents 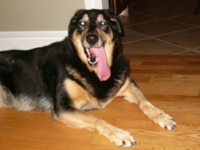 Kayla the Great, circa 987 g.e., held office as Mayor of Dogville for 81 days and ushered in the Era of Hilarity.
Retrieved from "https://wiki.godvillegame.com/index.php?title=Dogville&oldid=125965"
Categories: