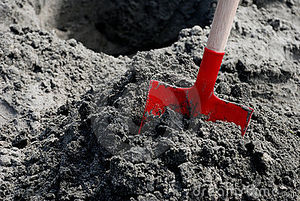 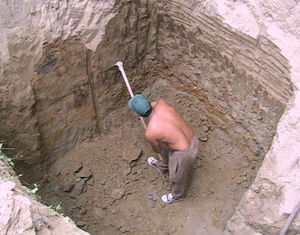 Digging is triggered by a voice of god command, such as "dig" or "please dig". There is a 1/3 probability of the hero actually digging once commanded to, but this assumes no 'external' influence, for example, a monster trying to rip the hero's head off. As with any other voice of god command, the hero is not always in a position to listen, and good timing is essential.

The timing of "dig" commands follows the same advice as for any voice command: when your hero is just travelling on the road, not busy doing anything else, and no more often than every 30-60 seconds (or, in game terms, once per milestone is a good guide).

Since it can take quite a lot of attempts to make your hero actually dig something up, you may wish to wait until you have full godpower. Also, since one of the possible outcomes is immediately joining a boss-monster fight, you may choose to dig when your health is full.

Several things can happen when your hero listens to your "dig" command.

There are a few conditions (beyond luck) before your hero will fight an underground boss-monster.

Much like the arena, dungeon, and sailing queues, a successful dig command can place your hero in a queue to match with other foolish brave hero to join forces against the boss. Your hero will wait up to 4 minutes to match with at least one other hero, who has either successfully dug into the same boss-monster lair, or used an activatable artifact to join the queue. If no other hero joins in time, then your hero will stop queuing and resume questing. (There is no diary entry for this queue timeout.) You may ask friends or guildmates to join you if you are queued and want to be sure to have a boss fight.

Of course, if other heroes are already waiting for a match, your hero may trigger the group to drop straight into a boss fight, so there may be little or no time spent waiting.

While waiting to match for an underground boss-monster fight, you may encourage and punish your hero as usual, but most voice commands will not work as your hero is busy.

Digging into a boss-monster lair will also trigger a diary entry. Below is an incomplete list of diary entries indicating that your hero is queued and waiting to match for an underground boss fight.