A few decades ago, it had become fashionable amongst those who try to be fashionable to be very, very thin. Referred to both as the "waif look"[1] and "heroin chic," it had suddenly become the epitome of physical attractiveness to be as skinny as possible. Heroes, traders, bartenders, and even monsters were going to great lengths to try to achieve this extreme beauty standard. Two itinerant enchantresses[2], recently arrived in Godville, understood that they could use their magic to help paying customers achieve the desired physique. Practicing their dark arts deep in the woods at night, they invoked and conjured and thaumaturged in an attempt to perfect the process. As a result of their magicking, a rift opened in the milestone-diary entry continuum, and through it poured dozens of very thin, fairy-looking creatures. These were the original Diet Sprites. 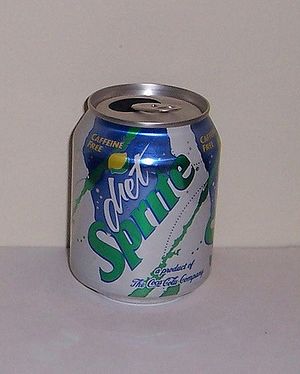 As their slim frames would suggest, Diet sprites inhabit the low-carb and fat-free woodlands between the towns of Godville. While not going so far as to engage in an exercise regimen, they spend their time sipping on lo-cal water, chain smoking, and cattily dissing each other's rumored weight gain. They try to avoid open fields and meadows, since even a weak breeze blowing across these spaces will carry the lightweight diet sprite off in a hurry. Diet sprites can wear the latest and trendiest fashions in fairy-wear, and never miss an opportunity to complain that their size 0 clothes are "just too big."

Diet sprites have a particular dislike for heroes, due to the strong aroma of high-carb, grain-based beverages that is always on their breath.[3] This rage fuels their attacks against adventurers, allowing them two attacks each turn; however, due to their wasted muscles, diet sprites only do half damage.

The treasure or trophy possessed by a diet sprite will be stashed away in a nearby hollow tree or similar hidey-hole. The weight of these items is too much for the creatures to carry while trying to battle with heroes.[4]