The Cobweb Gulp is a Combat Skill usually practiced when confronting enemy Heroes looting dungeons and castle cellars. The aim is to gross out the opponent to the point where he or she flees in disgust, hopefully leaving behind any gold pieces, jewels, health kits and rare weapons.

This skill among all others is the one most likely to backfire on the user, so much practice and perseverance is needed. We have gone to the effort of writing a brief How-To manual as well. 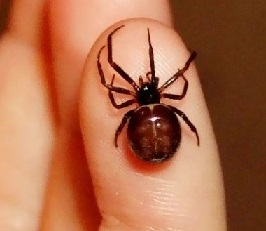 II. You must be face to face with your adversary who might, or might not, be too big or too tough for you to handle.

III. With no sign of hesitation, gulp down (not just eat, chew, etc.) the entire cobweb (and if available the large spider along with it).

IV. Stare at your opponent, as if you didn't just eat a cobweb.