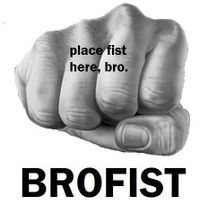 The Bromance'd guild was founded on 811 g.e. by an everyhero named Garrett Hawke during one of his frequent drunken whims. Upon sobering up two days later, Hawke woke on the third morning to discover two of his friends, Kittieman and Lia-Koro, clutching freshly-minted membership cards and snoring quite loudly in their new, apparent guild hall (ie. Hawke's Tent of Limited Proportions and Pervading Smell of Beer). No longer able to deny the role of guild leader when there were members to be led, Hawke enthusiastically began collecting dues. And thus Bromance'd came to be in Godville.

Although the guild is small and relatively new, its members take great pride in their team spirit and in their Saturday evening barbeque dinners (the latter of which may or may not involve digging into the gold fund to hire a woman to do any actual cooking for them). Slowly but surely, their influence will grow and spread throughout Godville, drawing more bachelors into the inevitable fraternity. Only the truly enlightened know that the toil to build a temple is but a means to thank the Creators for bringing together the best bros a guy could bromance.