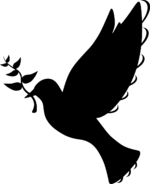 Befriending is a new feature introduced in February 2021 [1] who allows to get rid of a monster at the cost of an Invite to Godville for any hero who is atleast level 12.

Those invites can be obtained by activating an Invite to Godville.

Only one monster can be befriended at a time, ergo you'll have to wait for the effect to disappear before befriending another monster.

A befriended monster will cease fighting and will leave all of its loot behind. If that monster is encountered again during the duration of the effect (which is said to last a day or so,) there will be neither be a fight nor loot of any kind.