A Band of Punks 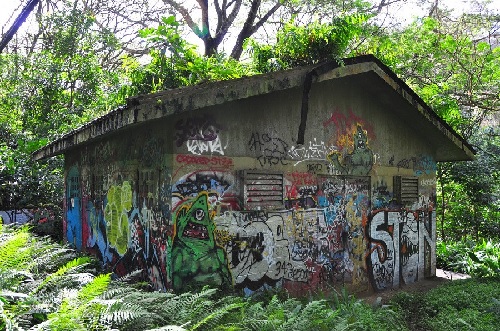 A Band of Punks Guild Headquaters

The Guild of A Band of Punks (also known as simply A Band of Punks, or ABP) is a guild that aims to foster friendship, provide a home, and to party extremely hard with heroes that never quite fit in with the rest of Godville. Its purpose is to create a family among many outcast heroes who are tired of being bumped around different guilds and never truly feeling accepted for how weird and unique they happen to be.

The current guild headquarters is located at the 18th milestone outside of Last Resort in an abandoned Build-A-Bear sweatshop. Renovations are underway on the building, and just recently the family of raccoons living in the walls were successfully sent packing. At some point in the future it is hoped that the colony of bats living in the cavernous basement will also be evicted.

At present the number of members in ABP is just one, although the founder has quite a few imaginary friends filling up the other positions right now. By his estimate there are roughly 36 including two sets of identical twins.

ABP is also the source behind the newly created Heroes For Kiddos Foundation, a nonprofit organization helping to mentor children in under-served communities throughout Godville. The idea behind the charity is that so long as you're passing through a town anyway you may as well visit with a few poor kids and their families before spending every last coin you have at the pub. As the guild grows larger it is a goal that even more charitable contributions can give hope back to kids who have aspirations of one day becoming really weird heroes themselves.